The great union that Fátima's message has with Russia has already led many people to contributing in different ways to the expansion of this Marian devotion in this country. The icon of the Mother of God of Fátima that now I show you is a symbol that reinforces the predilection that Our Lady has for Russia. Certainly this love was shown very specially in the appearances of July 13th, 1917 in Fátima (Portugal), and of June, 1929 in Tuy (Spain), in which the Virgin spoke about the future of Russia as drill of mistakes and pursuit to the Church in the XXth century and about its conversion when the Pope consecrated this country to her Immaculate Heart. It serves to remember that because from these appearances million of persons have prayed for Russia during decades, and there has born in the whole world a current of love and prayer towards this country. In this respect the icon can help also to that Russia pays the great debt of gratitude that has with the Virgin of Fátima.

Creation of the Icon

The idea of realizing this icon began in a trip to Moscow in the year 2000, but only at the end of 2002, when I started working as priest in Russia, the project began to be seriously prepared. First I asked about the project to priests, religious and lay people of Saint Petersburg, who encouraged me to put it into practice.

Then, for several months I devoted myself to study Marian iconography and also the diverse representations that until now have been done of the Virgin of Fátima. There are two principal types, which, in fact, were both images that sister Lucia had in the shelf of her room: that of our Lady of Fátima of the "Capelinha" and that of the Manifestation of Maria's Immaculate Heart in Coimbra. The latter is the one that has more influenced the icon for being, in my opinion, closer to the Marian iconography and because Russia has been devoted to the Immaculate Heart. Both images have in common the elongated figure of the face and of the image, the white cloths - garment and mantle- Of the Virgin, the Rosary and the ball that hangs from the chest of Saint Mary, symbols that have remained in the icon. Of Coimbra's image there has been taken the trimming that crosses the mantle, as well as the centrality of the heart surrounded with thorns. Finally, when I already had the well-considered project I wrote to Coimbra's monastery, to know if sister Lucia liked it. The Prioress of the Monastery answered me sending information and saying to me that I could carry on.

In this moment Father Igor Chabanov introduced me to the orthodox Russian iconographer Ivan who was ready to realize it and both of us started working on it, with the idea that if the icon liked the catholic priest and the Russian iconographer, we would have obtained our aim.

Since then Ivan has studied thoroughly the whole literature on Fátima, has prayed, has had several diseases (they say that a good icon must be purified also by the pain), numerous concrete difficulties of accomplishment have raised and, after two years of work, he has "written" this beautiful icon of the Mother of God of Fátima.

During this long period of writing of the icon Sister Lucia has received in several occasions photography’s of the evolution of the process. Though the prioress always showed the photography’s to Sister Lucia, then she usually answered me in plural, " we like it " and I interpreted with it that in the response Sister Lucia was included and continued forward. Anyhow, to make myself sure that my interpretation was correct after the death of Sister Lucia I wrote to Sister Maria Celina, the prioress of Coimbra, asking: can I say that Sister Lucia liked the icon? The response to this question was yes. Sister Lucia saw and estimated and liked what she saw realized of Fátima's icon. Pity that she was expiring before being able to see it finished.

Woman clothed in the Sun

It is a big icon capable to preside a Church, in which it is represented Our Lady in the shape of bust, as they are the Marian icons with popular worship in Russia, for example the ones of Vladimir and Kazán. 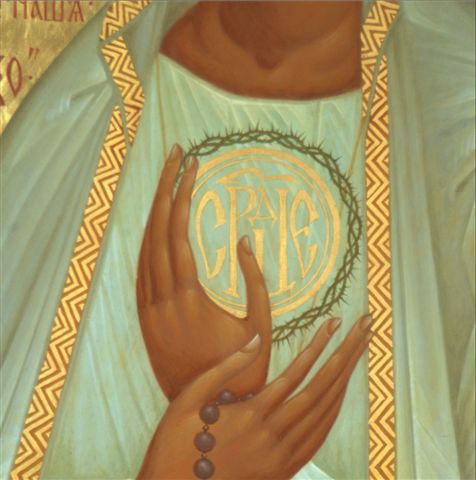 Together with it, the principal characteristic is that it is an image full of light. The Virgin in Fátima was full of light, of a light, which, as Francisco said, " is God ". The full of grace is the full of God, and in Fátima it is the full of light: a Lady more brilliant than the Sun. It brings Fátima closer to the theology of the icon. The first icon that every iconographer must paint is that of the Transfiguration, in order that he learns that the Icon must bring the divine world over to men, the God's light to the earth, the God's radiance in the white garments of the orthodox transfigured Christ. It is the same thing that happens with the Virgin of Fátima.

The icon takes incorporated its central part a medallion with the word sertse (heart) in characters paleoeslaves. This is the way Ivan proposed to save the difficulty that the orthodox sensibility has to place a heart in an icon, since they consider it to be too sensual. The letters, nevertheless, communicate the same reality of Maria's Heart, but by means of a symbolic expression according to the iconographic tradition. The Heart surrounded with thorns indicates the love that Maria has to the men and the pain that produces the small correspondence that these offer to the God's love. The remedy to this pain Maria is offered to us by her with a rosary in her hands, to which the iconographer wanted to give a violet colour in order that this way the icon reflected the idea of the cross that every Christian must accept to follow the Lord. This way this rosary dyeing violet is like a summary of Fátima's message: "Prayer and penance". 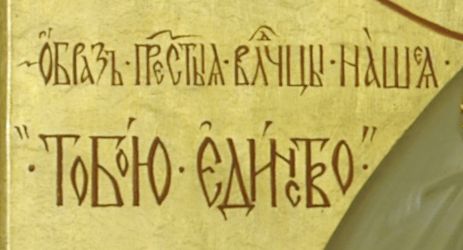 In the icon, besides the traditional MR ZY that indicates Maria's Divine Maternity two inscriptions have been written. The superior indicates the title of the icon: image of the Holiest Virgin of Fátima. The lower left one, in bigger characters, says “Toboiu Edinstbo” that means in you the Unity. 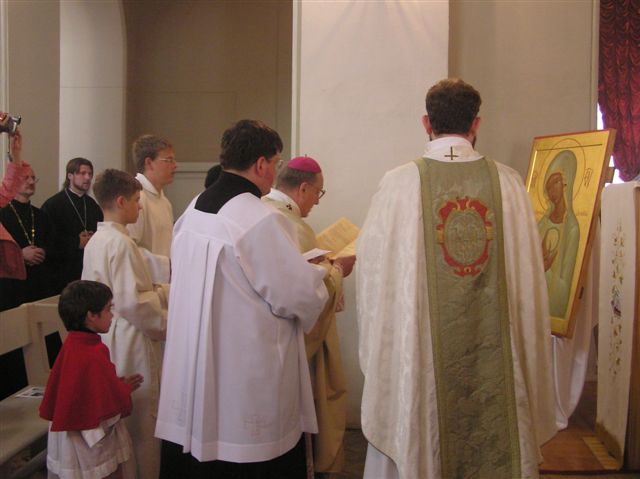 Place and day of veneration

The latter expression reminds us the ecumenical vocation of the Icon, which has been written uniting the efforts of a catholic priest and an orthodox iconographer, trying to create an image before which catholic and orthodox faithful could pray together. In her two types of important ecumenisms are expressed. The ecumenism of the Heart of Maria and the ecumenism of the martyrdom, both very related to Fátima's message.

Really, for all those who live in Russia it turns out undeniable that the love for Mary joins us very specially, as well as it is also a fact, that in her Mother's Heart we all fit and there we are already united. Besides the call that the icon makes to the unity is related to the ecumenism of the martyrdom to which the third Fátima's mystery on the martyrdom refers, having reported ourselves on the martyrdom of the Church in the XXth century. If the history of Russia is known and how we have suffered together the martyrdom in the Soviet orthodox and catholic Gulags and for the first time coexisted in friendship, nobody will be able to doubt that the martyrs of the vision of the little shepherds in Fátima include faithful of one and another confession. The Icon of the Mother of God of Fátima wants to be, in this sense, a service to the unity of the Church, in the person of Maria under Fátima's devotion. Finally it suits to indicate that the icon will be shortly placed in the catholic parish of Saint John the Baptist in Tsarskoe Selo (Pushkin - Saint Petersburg), but the project, if the Virgin wants that the icon reaches the sufficient worship, would consist of building her a small wooden chapel that at the same time it were the beginning of a Sanctuary to the Virgin of Fátima in Russia.